After many months of planning, outreach, and designing, the Remington mural project is moving forward with the first mural, on the corner of 26th Street and Hampden Avenue! The mural team submitted the grant for funding from the Baltimore Office for Promotion & the Arts in January 2017 and recruited Baltimore-based, international muralist Gaia to fulfill the community’s vision. We held four community workshops in September to come up with the designs that were relevant to neighbors across the three mural sites. Last week we found out that the designs were approved and it was ‘go time’!

As a team, we needed to quickly decide which mural to begin with. After considering everyone’s schedules and logistics, we agreed that Hilary house was the most ready to go. Gaia worked quickly to take the last photos of our neighborhood models and finalize the design. We put the order in for the lift and put the paint order in on Thursday for Friday delivery. Thank you to R.H. Fewster Painting (on Fox Street) and Sherwin Williams (on Falls Road) for donating the paint!!

Friday, things really started happening on site. Hilary finished some much needed yard work, the paint was delivered, and the lift was dropped off. Gaia showed up on site to sign for things and organize himself for the week ahead (he also brought his little dog Leena for Hilary’s son Lucian to play with!!!). The rest of Friday was spent doing a last minute hardware store run, planning, and site visits from neighbors and friends interested in the activity.

Saturday morning things started out at 10 am when Gaia and his assistant Brandon got started on preparing the wall. The two of them spent most of the day doing the dirty work of removing all of the old paint and soot from years of passing trains off of the wall. They scraped and sprayed until they were covered with the dust of the last 12 years of car and train traffic that left its mark on the side of the house. After a short lunch break, the artist came back by himself and finished washing and prepping the wall for the base coat. As the sun set, he was able to spray the house and as night came, we were able to start projecting and drawing the mural on the house!

Projecting needed to be done at night since it was shown on the house like a film. We used Hilary’s car to sit the projector on and shine the image onto the side of the house. We ran the electric cord across the street and Hilary watched for safety as Gaia got on the lift and sprayed the outline.

Many neighbors and several passerby stopped to check out the process and be a part of this exciting and unique experience. Folks decked out in Halloween costumes exclaimed their amazement as they walked to their parties for the night. Buck, from Hampden Ave, came over for quite a bit to check things out and share neighborhood stories. Buck has lived in Remington for most of his life and worked for the City for 20 years! Amazing.

We finished this step of the project at about 9:30pm, cleaned up, parked the lift, and gave Gaia and his equipment a ride home. Wow! What a couple of days.

Sunday was a day of rest, especially since it was raining heavily, which ended up working out fine since so much was accomplished the first couple days.

So, back to work through the rest of the week until it’s finished and Gaia has to take off onto another exciting artist adventure.

Please feel free to come by and say “hi!” and check things out. We would love to see you and the kids in the neighborhood will especially like the lift! Thank you to everyone who has participated so far in the workshops and for sharing your wonderful life and Remington stories.

Progress as of Monday morning, October 30 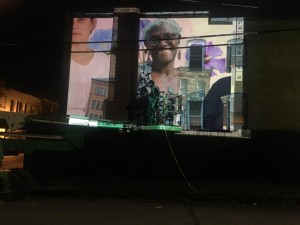 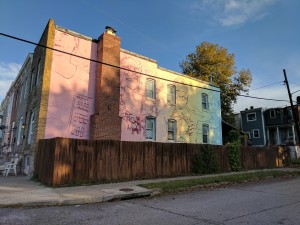 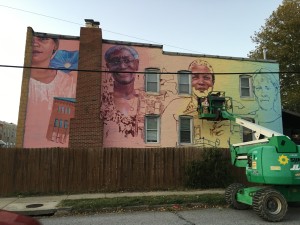 Remington Youth Community Radio (RYCR) is a FREE radio documentary, community building and youth development workshop organized by Art on Purpose. It meets every Tuesday evening from 5:30 – 7:30 at Kromer Hall in the Church of the Guardian Angel. This class is for youth ages 9 and up who are interested in learning about […]